Is God Calling You? 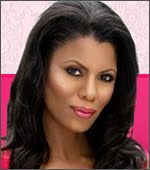 Omarosa Manigault Stallworth has found a new calling in the pulpit. I've just learned that the reality boardroom beauty plans to enter The United Theological Seminary for training to become a minister.

“I feel like God is calling me. He’s been calling me for two years and I can’t ignore it,” Omarosa told S2S today. She plans to begin classes later this year.

Though most may remember her from “The Apprentice” and “The Celebrity Apprentice,” or that infamous sit-down on “The Wendy Williams Show” last year, Omarosa has dedicated herself to several community programs. Most recently she has become a goodwill ambassador for the Hatian Support Program. She also works with Positive Vibrations and the New Image Emergency Homeless Shelter.

There's a consistent pattern in Scripture of what happens in a life that God wants to use and improve:

Is God Calling You?