God Is Smarter Than We Give Him Credit For! 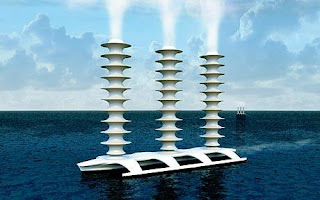 After reading this article I've come to the conclusion that man think God don't no what He is doing. For- get about the fact He's the one Who wake us up every morning with His breathe.
Ships with giant funnels which travel the world's seas creating more clouds to deflect the sun's rays could help cut global warming, say scientists The project, which is being worked on by rival US and UK scientists, would see 1,900 wind-powered ships ply the oceans sucking up seawater and spraying minuscule droplets of it out through tall funnels to create large white clouds.These clouds, it is predicted, would reflect around one or two per cent of the sunlight that would otherwise warm the ocean, thereby canceling out the greenhouse effect caused by Carbon Dioxide emissions.Article Here!
giant funnels Genesis 8:22