Dollar Bill Will Not Test Postive For Cocaine Because It Spends It Time In The Church. 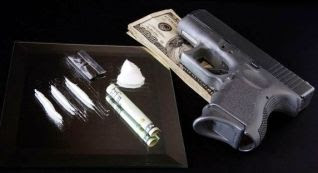 This was kinda interesting! So research has shown that $5, $10, $20 and $50 bills are more likely to be positive for cocaine than $1 bills. The reason for that could be because the "Dollar Bill"stay in church more that the other notes. I am just saying!
Now according to the report from CNN.com, recent research reinforced previous findings that 90 percent of paper money circulating in U.S. cities contains traces of cocaine. The report says that in an average of 20 months in circulation, U.S. currency travels extensively, from ATMs, to coffee shops, convenience stores and newsstands, to hundreds, maybe thousands of hands.The dollar just don't get around like the other notes,check this out. 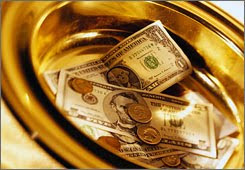 A well worn dollar bill and a similarly distressed twenty
arrived at the bureau of Engraving and Printing to be retired. As they moved along the conveyor belt to the shredder they struck up a conversation. The twenty reminisced about its travels all over the country. "I've had a pretty good life," the twenty proclaimed.
"Why, I've been to Las Vegas and Atlantic City, the finest
restaurants in New York, performances on Broadway, and even a cruise from Miami." "Wow!" said the single, "you really have gotten around." "So tell me," says the twenty, "where have you been
throughout your lifetime?"