Why Are Black Pastors Abandoning The Old Black Church Teaching? 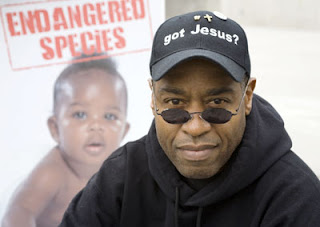 While Rev. Walter Hoye was during his 30 days jail stay for rejecting a deal from a judge to keep 100 yards from an abortion "clinic" he penned a letter, kinda like the letter Dr. King pen from a Birmingham jail...But what I find fascinating is how the good Rev.has all of a sudden abandon The Old Black Church (baptist) teaching and pick up the cause of the Catholic and White Evangelical agenda?... Question how did abortion become the top thing affect/effect his church and community in Oakland Calf?...I going to be frank with you; I have never heard of any Catholic Church or other church speak out about the ills that affect/effect the black community... But the good Rev. is encouraging black pastors to push the abortion issue on Sunday morning and during mid week services...If that takes place what will be come of the agenda for the black community?...So Iam asking can praise adequately be raised for the good Rev who seems to have forgotten his oath?...Who's by the way is an African-American Baptist pastor at lest that's how he describes himself. Here's the letter:


It's nothing wrong with pastors speaking out about abortion on Sunday morning or during mid week services but we should also not forget why most likely you would have a young African American women considering an abortion...How can you convince a well informed pregnant woman to keep her baby? When the moment she awakes she has to put on her own survival gear and that is to stay alive another day...She has to deal with ;violence,unemployment,homeliness,discrimination etc...
The Old Black Church Rev Walter Hoye Oakland Calf Abortion Baptist