Thousands Line Up In Birmingham For Section 8 Housing Applications. 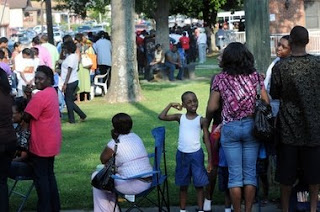 More than 1,000 people line up Tuesday morning at the Smithfield public housing office on Eighth Avenue West in Birmingham, the line snaking around the block to apply for Section 8 housing.

The line for Section 8 housing applications stretched this morning more than three blocks from the door of the Smithfield public housing office in Birmingham, Alabama, as hundreds showed up for the program’s first open enrollment of 2009.

Last year, the authority handed out 4,000 applications during open enrollment, said Sandra Collier-McQueen, leasing manager for the Birmingham Housing Authority. The numbers are up because of the downturn in the economy, she said.

Jacqueline Riggs, who currently lives in Kimbrough Homes in southwest Birmingham, was one of the first in line at midnight Tuesday. "I just need the help," she said.

Section 8 provides rental subsidies in homes or apartments for families that meet a variety of income requirements.

Police officers were on hand at all three locations where applications were being distributed.

The traffic flow resembled the days when Alabama football games brought thousands to the area at Legion Field. Cars were lined along the streets around Eighth Avenue North. Cars pulled up and allowed passengers to get out.

Applications will be handed out until 4 p.m. today. The housing authority will accept the first 2,500 applications it receives.

Several in line at Smithfield had already prepared their mailing envelopes and were going to complete them immediately and go straight to the post office to place them in mail.

Cars have already lined up at the main branch of the post office downtown as people fill out the applications before dropping them in mail. Source!