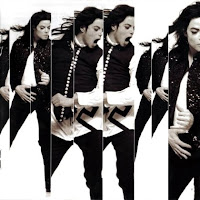 I pray that grace, peace and mercy will cover Michael family, friends and fans in this time of mourning. While he was a great artist and so much more, he was also a father, a brother, a nephew, an uncle. And a son. What a tragedy for any parent to have to bury their child.

We have no way of knowing where he’s ultimately spending his eternity, but I was reading something posted on Mary Mary’s Facebook page that touch my heart and lifted my spirit:

He was a legend; an icon. His career, epic. His talent, unrivaled. His life, troubled. Often imitated but will never duplicated. He is the King of Pop. The late Michael Jackson. Too know that he accepted Christ in the end is The most important thing that could have ever happen to him and also for us. Rest In Peace Michale!
It Won't Be Long Andre Crouch Michael Jackson