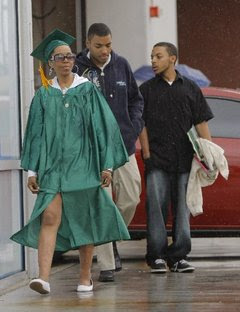 On Friday, 50 year old Toni Clark graduated from Essex County College in New Jersey, after living on the streets the entire time she attended.

Clark was one of almost 1,100 graduates at the largest commencement in Essex County College’s 40-year history. But while the rest of her graduating class went home and celebrated after the ceremony, Clark walked the streets in her graduation gown and hat. Even though she had nowhere to sleep that night, she wore the gown proudly.

Toni Clark earned her degree with no books, no computer, no proper place to study and nowhere to sleep at night. Before deciding to attend college she lost her job, her apartment and had to go on unemployment benefits. She saved her unemployment for her tuition and food, but there was not enough for her to pay rent or buy textbooks.

The entire time she was in college no one at her school suspected she was homeless, but near the end she was kicked out of the computer lab and library at the school for trying to bring suitcases and luggage with her, so she pared down her belongings to one small bag.

After graduating Friday, Clark said she would go and spend time with members of her family and try to find a job. She also wants to go back to a 4 year school and get a bachelor degree in education.

When told how inspiring her story was, Clark replied: “If I can do it homeless, anybody can do it who has a home.”