Debra Lee Need To Be Fired! 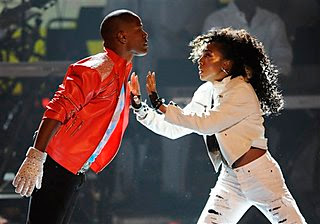 I should've known better.I could use several words to describe the BET awards show, but i decided to keep it simple The word i have chosen is HORRIBLE. It was totally embarrassing. The artist of today are talentless, unlearned and disrespectful. And we say this our future? God help us....On Sunday night, BET held their annual BET Awards show what a mess of a show. Ever since Michael Jackson's unexpected death last Thursday, the entertainment network had been scrambling to find a way to honor the legendary singer. Producers were quoted as saying the show would be re-tooled to pay proper homage to the "King of Pop."

The tributes to Jackson felt thrown together--montages of Jackson's career were arbitrarily intertwined throughout the telecast while artists shared their memories of Jackson as the show cut to a commercial. Despite the minimal effort, the show was too often void of talent and class.

It's amazing to think with as many artists as were present on Sunday's award show, that there weren't more standout moments that could rightfully pay tribute to Michael Jackson. That's certainly an indictment of the modern age of music, but it also showcases the genius of the "King of Pop." Though he is gone--and hasn't made a wildly popular album in almost two decades--his talent still outshines any artist working today.
Beyonce Jamie Foxx Kanye West Keri Hilson Lil Wayne N.E.R.D. Ne-Yo Rihanna Ryan Leslie Soulja Boy The Dream