The death penalty is one of the most controversial and debated-about issues among Christians and non-Christians alike. A survey on Christia.net.com
reveals that believers are divided over the morality of the death penalty.

Of the Christians surveyed, 49 percent were in favor of the death penalty, pointing to the line in Leviticus 24:20 - "...eye for eye, tooth for tooth...". They also believe that Genesis 9:6, which states: "Who so sheddeth man's blood, by man shall his blood be shed: for in the image of God made he man," condones the death penalty.

On the opposite side of the spectrum, 38 percent of Christians stand adamantly against the death penalty. These respondents point to Matthew 5:38-39: "You have heard that it was said, 'Eye for eye, and tooth for tooth.' But I tell you, Do not resist an evil person. If someone strikes you on the right cheek, turn to him the other also." 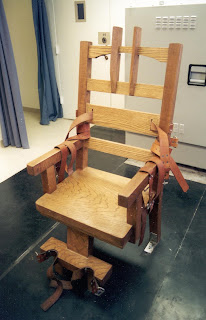 A small group of Christians are unsure about whether or not the death penalty should be condoned. One person in this category argued that DNA testing often reveals false convictions. Proof of innocence does not do anything for a person who was already given the death penalty. According to another respondent, "We can't look back to the Old Testament to make a decision because we're not under that now. I just know that I wouldn't want to be the one to decide. But something needs to be done with those who murder and maim people.

I've never understood how a Christian can be both pro-life and pro-death penalty. I don't buy the "he forfeited his life the moment he took another" excuse, since not all convicted death row inmates are actually guilty. Are the innocent ones who are executed just collateral damage? It's all fine and good to advocate killing murderers, but I doubt most death penalty advocates would be so quick to condemn if they (or a loved one) were wrongly accused.