Celebrities Reading The Bible: Spreading The Word or Selling Out Jesus? 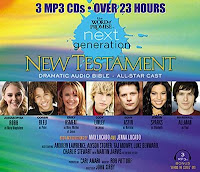 Now there's nothing wrong with the making of this audio bible,’ but is it for all the wrong reasons? Is it all a big marketing scheme? Because I know a lot of people who would only want to listen to this CD just because they see

the actors on the television every day. Question:

Is this a smart way to get people interested in the Bible, or are they just selling out Jesus?.. In today's world, celebrity endorsements do sell...maybe it's a sad cop-out, but we have to consider how some people might not hear the Word of God otherwise.

I also think of it this way. James Earl Jones and Charleston Heston will be known by this generation as the voices for the Bible but the younger generations, maybe not think so... Also I think of how clear and plain it is to hear James Earl Jones reading in his deep, rich voice the Word of God. Jones have a brilliant and distinct voice that bring the words to life for our ears. The Bible was still the Bible, but Jones had a way of speaking that made you want to hear what was being said...But now we have this I cannot judge the motives of the people who produced this project, but one thing is clear: God will use it for GOOD.
Celebrities Reading The Bible Spreading the Word