Asleep at Tattoo Parlor, Wakes Up With 56 Stars On Her Face. 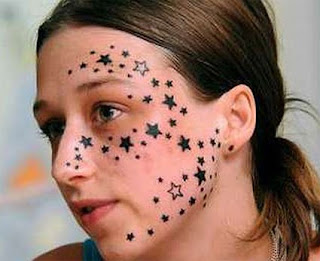 A Belgian teen girl went to a tattoo parlor to have 3 little stars tattooed near her left eye. She fell asleep and woke up with 56 stars tattooed on her face.

For this to have 'accidentally' happened there must have been some form of drugs or alcohol consumed, or perhaps this girl was just not happy with the tattoo she initially thought would be a good idea.

Kimberley Vlaminck, 18, is suing tattoo artist Rouslan Tourmaniantz to have him pay to have 53 star tattoos removed from her face after an unfortunate mis-communication. Vlaminck went to a local tattoo artist to have 3 little black stars tattooed on her face near her left eye. For some reason, she fell asleep during the inking process and woke up sometime afterwards with 56 stars in total nearly covering one side of her face.

It’s not clear how or why Vlaminck fell asleep and remained sleeping for so long and there are allegations that drugs or some other means were a factor. 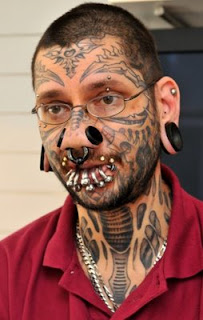 “I think he didn’t understand what I wanted,” the teenager complained to the UK Sun. “He spoke only fractured English and French, but I explicitly said in my native tongue, French, that I wanted three little stars only near my left eye.” (The French words for three (”trois”) and 56 (”cinqueante et six”) sound nothing alike. Maybe go with hand gestures next time.)

Tourmaniantz insists the teen asked for 56 tats and that allegations that he “doped” or “hypnotized” her are untrue.” Question would you let someone who looked like that give you a tattoo?